Well, quite a heavy first blog this! However it gets some important basics out of the way and hopefully into the memory bank. It covers the trajectory of our Sheds spiralling out not only numerically but also in diversification into community needs and issues that have similar roots as Sheds.

There was a launch item in Whitby Gazette of 10/9/2020. It is an overview of how Whitby Community’s Compassion Project has come about.

There is something known as technology transfer from one situation to another that is different but with strong similarities. This project takes “the way of Sheds” into other important strands in our community. Not alone but with other organisations and, importantly individuals, who see things along the same lines.

Quite a lot of thinking, researching, discussion and preparation has gone into this project. Compassion may sound “fluffy” but it has a very practical way of working, in fact.

We start with looking at geographically related  Whitby district areas, with overlaps as you might expect. There is a lot of commonality, of course) andWhitby is Whitby (and in that phrase the whole district is included).

Whitby has its well recognised Whitby Way. It has to find its own way, but it is wise to know what is going on elsewhere, take careful note and investigate. Build on experience but weigh it and adapt.

Whitby District Sheds have been – along with other voluntary projects – something that evolves. We evolved from one Shed to four; we evolved to include women in a Men’s Shed environment; we matured into a strong caring ethos; we dipped our toes into children and young people’s actions.

The common factor in it all is caring about others, their needs and circumstances. Encouraging and demonstrating compassion within a group. 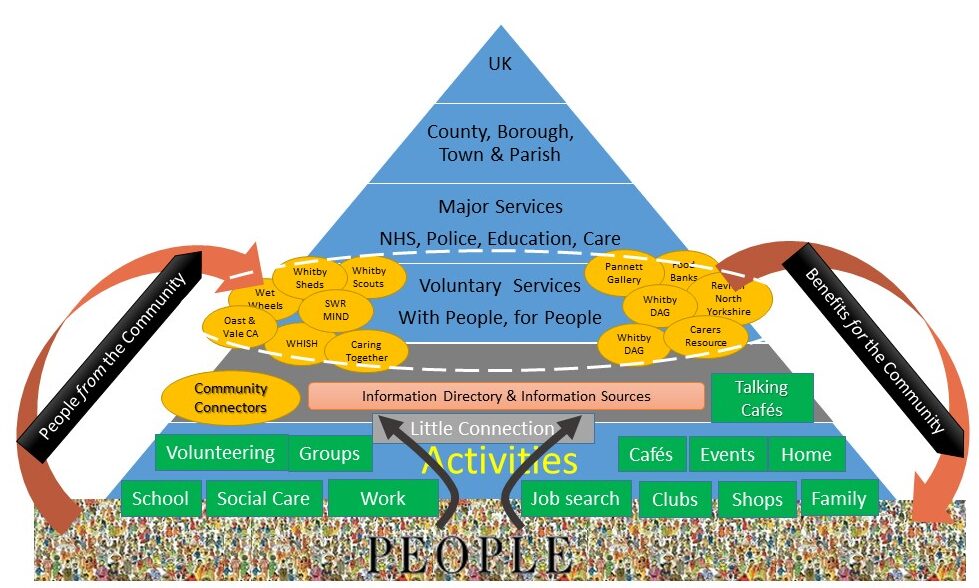 The Pyramid of Caring

Exploring the passages on the inside 🙂

At the base is “us”. All of us. Those resident in Whitby district from Bay to Staithes and inland but also others committed to our area because they travel in to work, run businesses, operate services and identify as being a part of “us”.

It is the People that this project is about.

At the top is UK Ltd – our Government and multi-nationals who have a lot of power and responsibility in shaping society generally and down to out community here. They pull a lot of levers!

There is then a local government infrastructure and agencies (like NHS) that are involved with planning and facilitating for regional and localities good.

The middle ground is organisation that we can have a hand in. The green blocks are clubs, groups, initiatives, drives that are ways for people to be “occupied and entertained” but also to work together to support one another. Many people find ways of their own accord to join in.

However, there are people who do not and are to various degrees isolated and “at a loss”. They may or may not acknowledge that and maybe not realise that they are. It is the community links people have that can be so important when life turns sour.

These “unattached” or “loosely attached” people who sometimes need to find some support. They are the two black arrows going through the gap into the territory of often voluntary organisations that have as their purpose benefitting people. They will try to help connect people into the green boxes that might suit them best.

The two large arrows that are like ears recognise the fact that it is often volunteers (people) who support the yellow organisations that in turn support the people.  A virtuous circle!

The grey band is the territory of this Whitby Community’s Compassion Project. It shows 3 important elements that are explained in more detail at this link  xxxxxxxxxxxxxx

That’s it for now.