This web-site is building nicely and beginning to reflect the breadth of the project and of compassion too. Work on a draft “recruitment” leaflet is well advanced and will over the next two or three weeks be refined based on feedback. 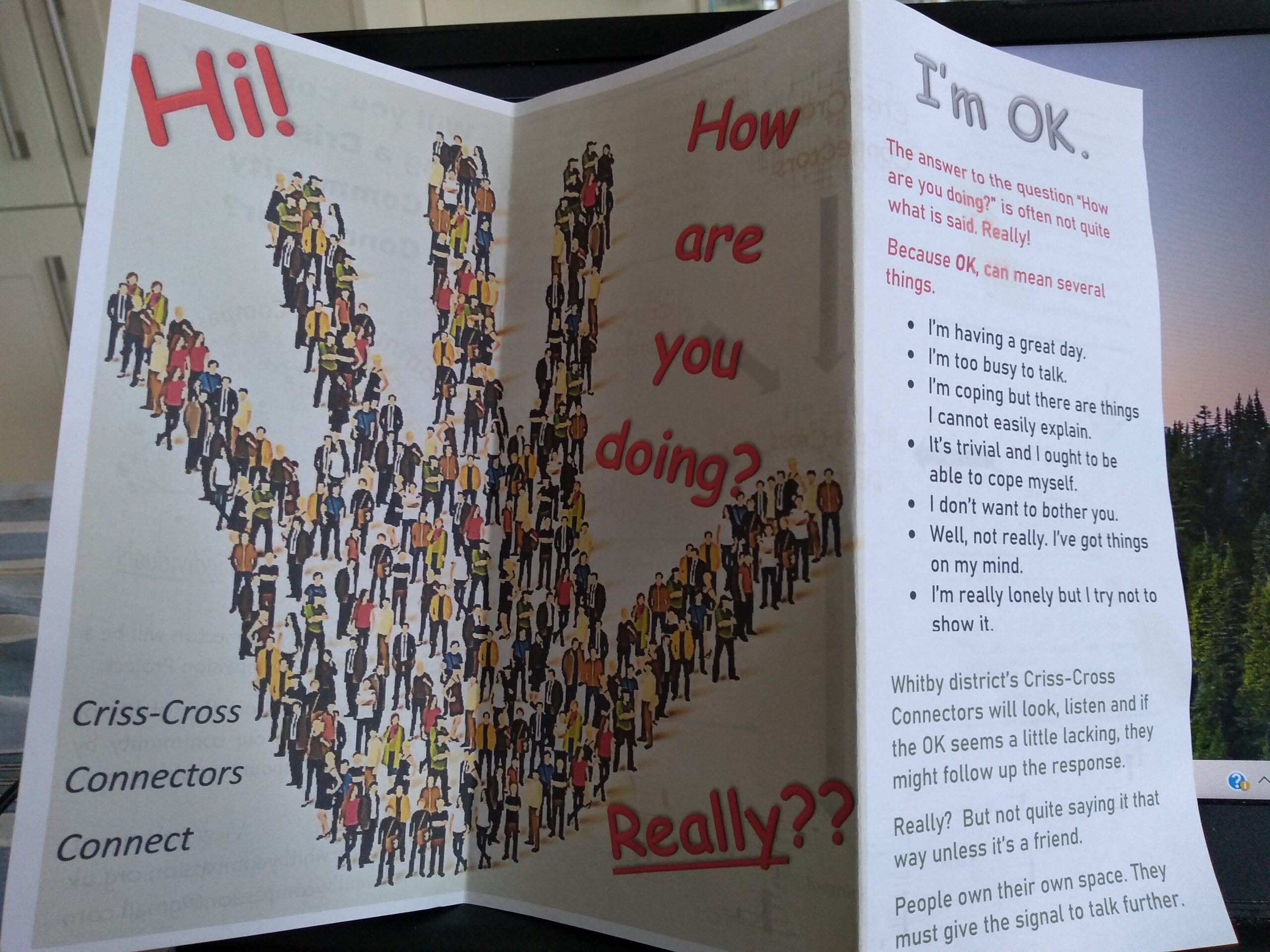 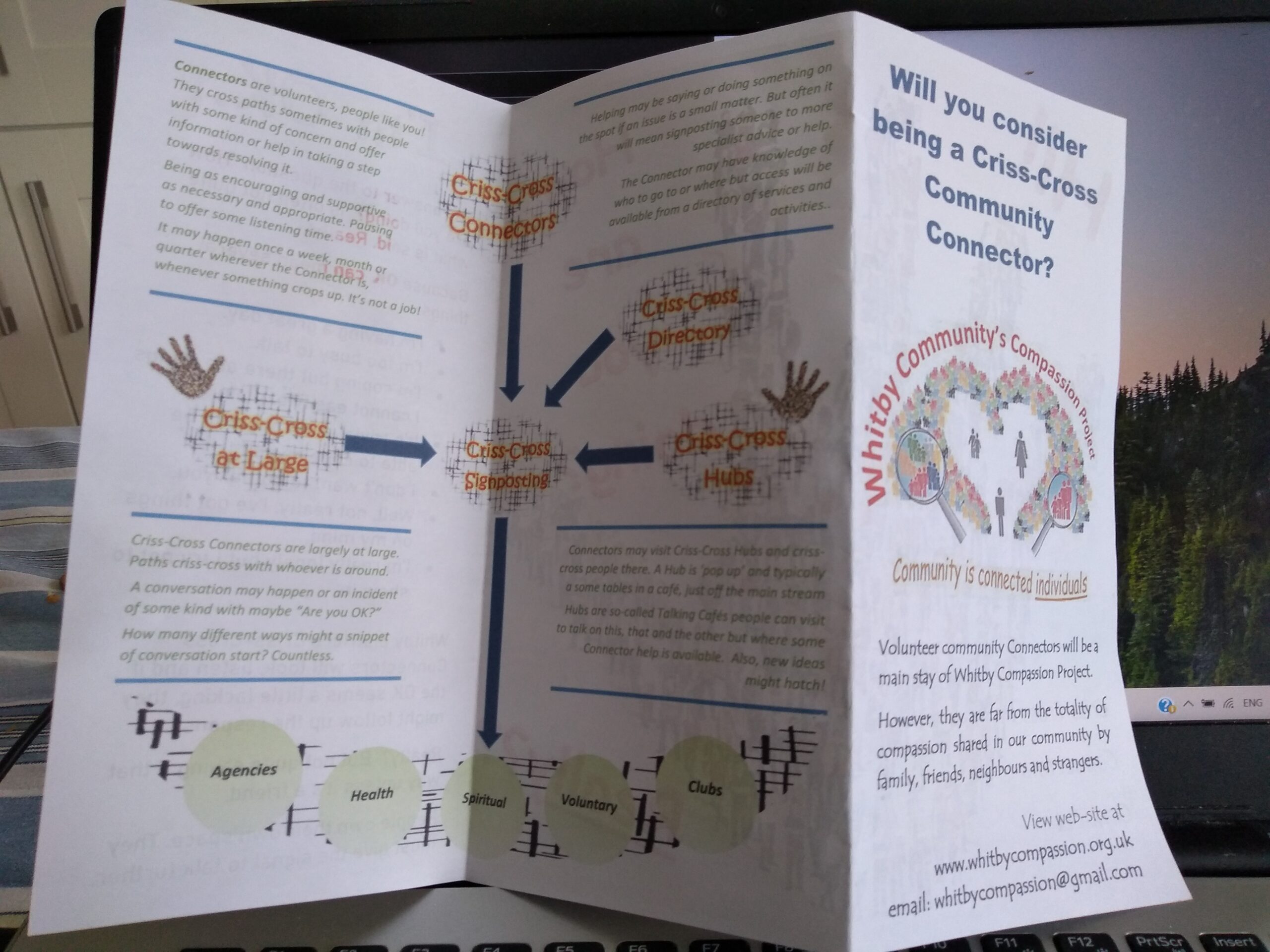 Automobile Shows often feature “Concept Cars” that test reactions to novel designs and body shapes.  Below is a Concept Card!  Even strayed into poetry :- 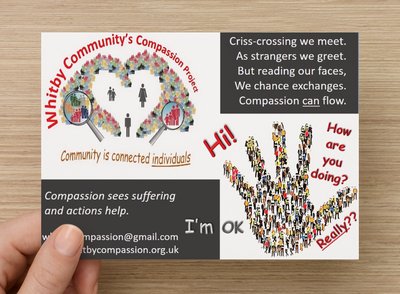 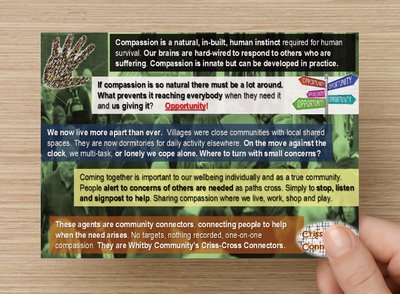 Another aspect of groundworking (digging out the foundations ready to pour concrete into the trenches!) is to consider how to monitor progress of the initiative. To show how 1:1 compassion is going.

Now, I don’t think that compassion can be quantified. We are talking about mixed fruit not apples or pears. Those involved with helping people know that “numbers” are not the measure in many respects. 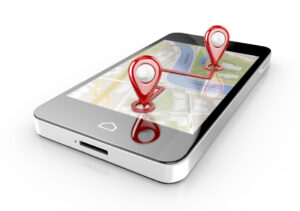 However, can this initiative do something that shows quantitatively how compassion of Connectors spreads. Think Covid-19!  Compassion is a bit like the virus. Somewhat (not totally though) invisible. The project will operate rather like a pin-ball machine with moving pins! Haphazard and not repeatable engagements. Predictable only in statistical terms:-). The Criss-Cross Connectors will not have channeled contacts passed to them by some central body, nor challenged with “success quotas” (whatever success might be).

Track not trace springs to mind.  Track compassion but don’t even try to trace it! Confidentiality is key. 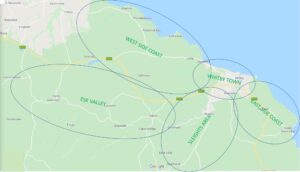 How might Criss-Cross tracking work? Simply knowing there was an event where a Connector engaged meaningfully with a person provides a simple counter. Knowing the approximate location (postcode derived) where the criss-cross chat occurred will say something about the distribution of compassionate interventions.

Knowing the kind of help pointed to (if any) will add feedback on impacts (at the level of a signpost to an organisation but not which organisation). Not recording the type of concern/problem even. Ensuring privacy of contacts, and ease of “reporting”.

It might be extended to include feedback from people helped “I was helped on 10/12/2020 in Staithes” with option for a comment.

Doable???  I personally think so. Part of Whitby Innovation Talent (WIT!!). If any bright sparks would like to think through issues and work up a prototype as an app, we would be very pleased to hear from you (graham_storer@btinternet.com).

Surfing on the crest of the wave

Not any of us at Sandsend!

When the Sheds started at the beginning of 2016 there was a strong sense it was important. Those few huddled round it needed it and that was the only evidence needed to start in North Yorkshire; plus  it was happening in UK (UK Men’s Shed Association) and it had been seen in operation in Australia where it was blessed by the authorities. It was not long before evidence was seen from what was being done in Whitby area.

It would have been foolish to have ignored what had seen and the Shed model. Knowing something can be done is half the battle, it is accurately said. But, there is no way that Sheds are copies of each other. The principles are. The observant might have realised that in the materials and this blog the place name of Frome has not been mentioned.

Why? Because there is no need. The principles are well understood (there’s a book on it!) and it is a case of applying them in a way that fits all that is already going on in and around Whitby. Whitby Community’s Compassion project does not replace or duplicate, it contributes with a focus on those who may fall through the net because of the words in the leaflet above under the meaning of OK. 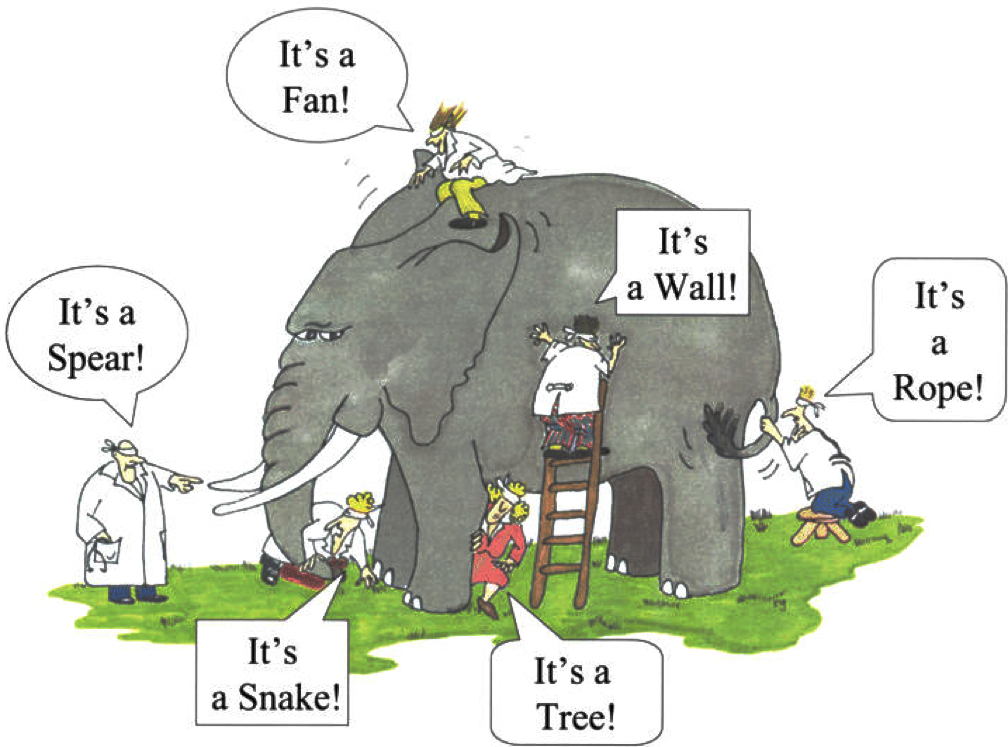 Like the Sheds, seeing is believing, and the visit to Frome to see all aspects of what had been happening over 6 years was the convincer to me. Not Patrick Abraham’s of Frome Men’s Shed who has been so helpful over the last 18 months, but the visit!

Frome remains relevant. However, the players there and around Whitby, their  attitudes and mix of experience means that this is NOT Frome implanted in Whitby. It is bottom up, top down and middle out depending where individual people and organisations believe they fit. Community!

There is a real sense that this project may be another like the Sheds where the collaborative spirit felt like Surfing the Wave of responding to a need. Men (and some women) needed it and it was their “compassion” towards each other that energised the work. That is not unique to Sheds.

The thinking is and the project is.  We are beginning, despite Covid-19 separation, to get focus on that which  rises on the foundations. The utilities need to be connected and the bottom courses of bricks laid! 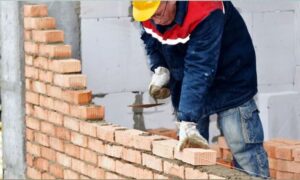 When a bricklayer builds the walls of a house the wall does not go up in complete rows. The corners are built first, carefully, because if they are right a string line can be stretched across so that the infill bricks are all easily laid to the correct level and alignment.

Our corners will be the 3 pilots guiding what happens as the project moves into Whitby and further out into the rural areas. The Connectors will be roaming free, not restricted to where they live. 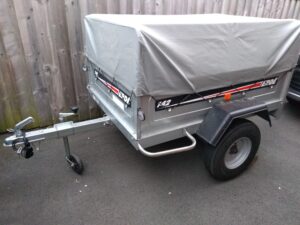 The project now has wheels. If Criss-Cross pop up Hubs are needed in particular places to meet need (the rural heart) or at “events” there is the need for a rock up and roll out cafe. Self contained. In a trailer. We have the trailer below on loan (available for purchase) so some members of the Shed can plan it and do it. 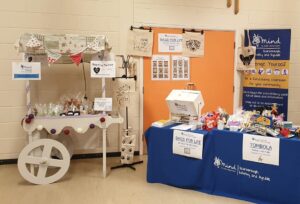 Candy Cart at a MIND event

Expect a proper to scale 3D model of what it will become first and then components for assembly made in different Sheds possibly.

Early on in our Shed history a Candy Cart was made which packed down into a suitcase=like flat pack package. 18 months 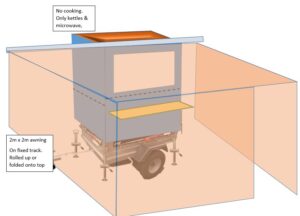 ago the cart was donated to SWR MIND.

Some of the Shedders have coachbuilding experience and others are bodgers (chair makers from Buckinghamshire woods), so the outcome might be some interesting hybrid.  BTW, expect a caravan awning to feature as used now at Sleights SAMS for a lounge.

Covid-19 Compassion MUST BE ACKNOWLEDGED in this state of the nation blog!

There’s a radio 4 programme, RETHINK  on Tuesday 29th September at 9am about the way Covid has affected behaviour.  “Has the Covid crisis shown governments how to alter the ways citizens act? Or is the real lesson the way that individuals have made radical decisions about their own health?”  Possibly a useful programme to listen to.

Whitby, and indeed many places, were not slow to respond to Covid-19 needs. If you want examples of compassion look there. People – citizens, traders, groups, agencies – pulled together in remarkably coordinated ways to solve food distribution needs to vulnerable people and to provide help lines.

Many groups took on new roles or adapted their service provision greatly. E.g. Those like Revival North Yorkshire and Ryedale Carers who did regular “get together over lunch” events for older people and carers turned to organising food parcels to existing and NEW clients. Coast and Vale Community Action got into the business of advice/help lines to people often around food supply but more generally (like arranging conversations with isolated folk and special services). WetWheels adjusted to irregular services (you could say they were all at sea but they weren’t). Carers Resource became a leading “servant” to the Whitby Community Alliance of volunteer based organisations which was an initiative conceived by WHISH and Whitby DAG that developed quite rapidly on Zoom which itself was a new venture in meeting by most! Pannett Gallery got on board by providing Whitby Gazette with a picture of the week with a quite full background note.

The message is that there has been a lot of creative reorganisation – encouraged and facilitated by NYCC and Scarborough BC – that “happened”. Why? Compassion frankly, organisationally but in reality personally of course. 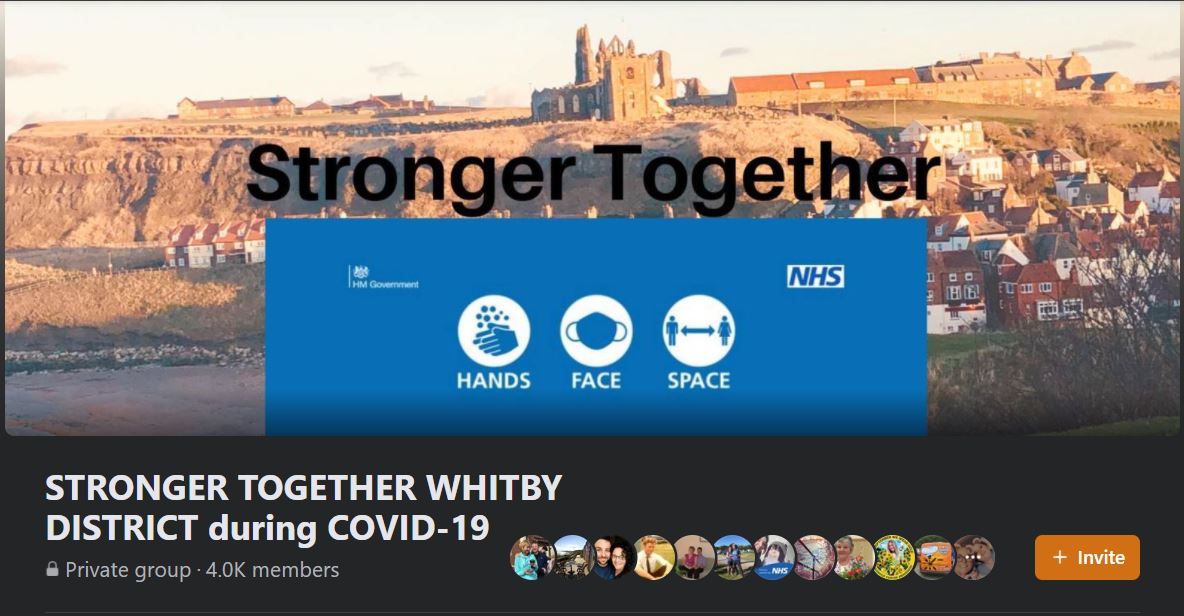 Facebook ‘Stronger  Together Whitby District during Covid-19‘ site set up spontaneously by Helen Jayne Brown & Co (yes, a team effort) addressed all manner of difficulties of the day from toilet rolls to cakes with regular updates on the changing guidelines and regulations surrounding Covid-19. It became for many a source of reliable information that in the main stayed clear of frippery. It did connect people rather like the old days of TV when we all gathered round the TV on a Saturday night (now we have it on demand when we want it).

The way we shop has changed and many things will not simply return to the old normal. But, values like personal compassion will not die out because, as the reverse of the postcard says, compassion is baked into us. It happens and NYCC/Whitby Gazette “Salt of the Earth” has shown that. We simply need many ways leading to opportunities to practice it. This project is but one at the individual level.

There is a feeling we are thankfully  continuing to Surf the Wave in Whitby. Need to keep stable and have a steady head:-). Whitby Community Alliance is an excellent alliance for building trust and mutual support in the voluntary sector where pressures on those leading projects can be very high, not least in raising funds to continue what are valuable services and a key envelope of organisations the Connectors can point to.

There’s some very interesting education takes on compassion being implemented by schools and these will be reported on in the near future under the Compassionate Schools page.

But for now, here are two sources for parents to review 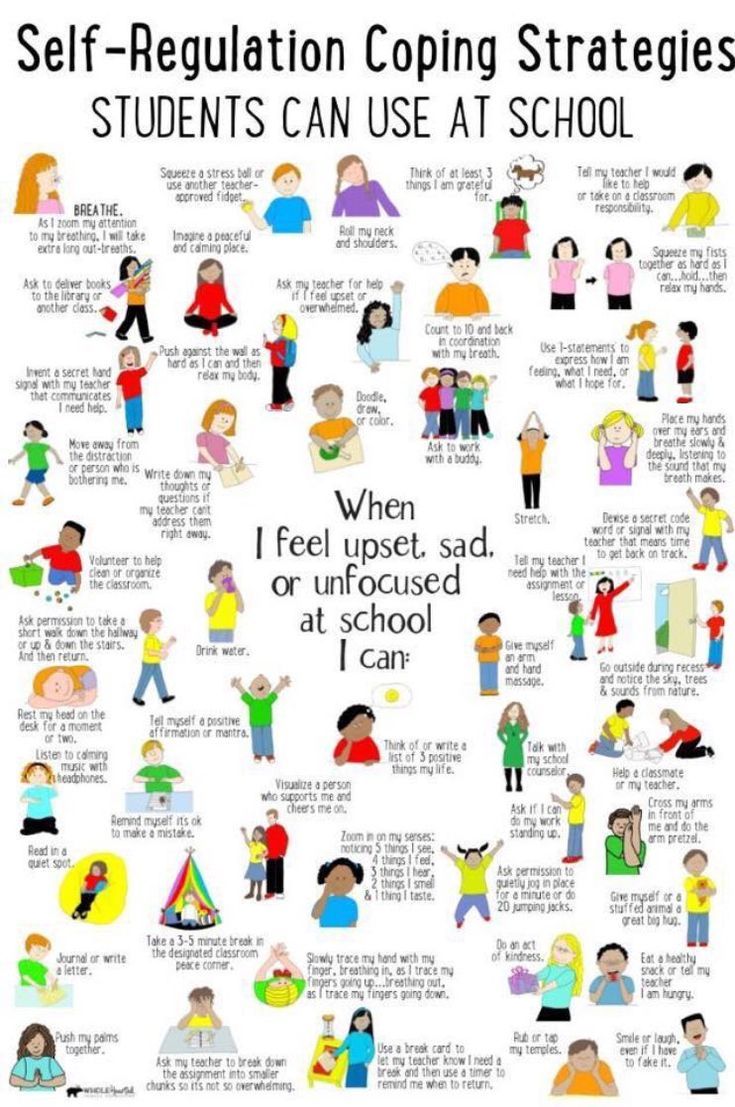 Apologise for image not being clearer.